An Open Data platform (not depending on any proprietary software) approach has been adopted to ensure the easy integration and enterprise deployment can be achieved in years to come. To ensure ROI of the intended system is fully appreciated, a comprehensive study was carried out in advance.

As a result, a sound Water Data Model is designed. It has provision for future integration with functional requirements, such as Syabas’s Billing, CIS, Hydraulic Model, Scada/Telemetry, Operations and Maintenance, Planning and Tech-nical Development, NRW Management and Zoning and others.

Telekom Malaysia Berhad (TM), Malaysia’s largest provider of information and telecommunication services, has adopted Intergraph’s communications specific FRAMME AM/FM technology for the management of their network of facilities since 1997.

Since 1996, TM’s network designers and planners have been using LMNS for the design, planning, and commissioning of all its physical network schemes. LMNS, which is based on Intergraph’s FRAMME technology, was also provided by DG and Antaragrafik.

In March 24, 2011 – Telekom Malaysia (TM) and its partners recently started work on its next-generation Network Engineering Planning System (NEPS), which is scheduled to be completed in 18 months.

TM has awarded the contract for the supply and support of NEPS to Digiphonic Sistem Sdn Bhd (DG). DG, in turn, has engaged Antaragrafik Systems Sdn Bhd as the System Integrator (SI) to develop, migrate, deploy, test, document, commission and provide training for the new system.

Network planning and engineering is a key process for any telco, and NEPS is aimed at improving TM’s service excellence and operational efficiency.

TM Network Engineering Planning System (NEPS) is an integrated system converting the whole planning cycle from network design, implementation to commissioning. During the project, Antaragrafik project team members migrated AM/FM/ Mapping data from Microstation/Oracle7 FRAMME environment into a unified Oracle 11 Spatial Database, from 14 database servers scattered across Malaysia and provided a new end-to-end physical network planning system for inside and outside plant (ISP and OSP) by adopting WEB based and also field mobile application which shall be utilized and used across TM Malaysia.

We also provided integration services between various systems within TM, such as finance system, logical inventory system and data warehouse system. NEPS currently has hundreds of users from various TM planning offices throughout Malaysia, and the productivity improve-ments during planning and increased data integrity between the differ-ent systems, NEPS has established itself as one of the fundamental systems within TM.

Upon completion of this project, NEPS will be the sole system used by TM for the planning and engineering of its in-side plant (ISP) and outside plant (OSP) network infrastructure, which covers the access, core and transmission networks.

Through establishing a cartographic database, Antara grafik enables the Department of Survey and Mapping Malaysia (JUPEM) to extract digital maps for publication. This include publishing them in the form of an interactive CD-ROM map application (eMap), which is a user-friendly and low-cost way of promoting GIS usage among the public. This inter-active CD-ROM contains an integrated, standalone map-viewing appli-cation, that comes with the geographic data of Malaysia.

This project was awarded to MK Survey Sdn Bhd in 2013 who is our business partner to supply 100 units of Leica Flexline TS06plus 5” R500 with accessories to JUPEM to replace existing equipment. This project is to upgrade the Cadastral Department old equipment to the latest model in the market. This acquisition is part of the modernization in the Department’s capability to provide fast and accurate end product, which is the Land Title.

SABAH LAND & SURVEY – We also supply 4 units of Leica Viva GNSS to Sabah Land & Survey Department in year 2012. The depart-ment has been using Leica instruments for quite some time, due to its reliability and ruggedness to withstand the harsh condition of Borneo terrain and jungle. The project were assisted by our partner LM Instruments in Sabah in promoting and provide local immediate support to end user.

In 2012 we supply of one unit of Survey Grade GNSS receiver to TNB, Jabatan Project Utama, Bahagian Bisnes Baru Dan Project Utama. This project was implemented in additional to TNB’s existing asset, which is GPS1200 systems. The additional units comes complete with modems in order to provide RTK positions during real-time observations.

In 2013 Antaragrafik supply, deliver, commission and training of 2 units of Leica GNSS Receiver GS15 Professional for Universiti Tun Hussein Onn, Batu Pahat. This acquisition of Leica GNSS receiver is mainly for study and research. It consists of one set of GS15 receiver with accessories, equipped with radio modems to enable user to achieve cm level of accuracy during observations. The training and commissioning was conducted at its main campus in Parit Raja, Batu Pahat, Johor.

We supply, deliver, and commissioning of Leica Zeno10 GIS data collector for Malaysia Palm Oil Berhad, Unit Biakbaka & Kultur Tisu in year 2013. It was delivered to equipped the field officers to locate, mark, and identify the agricultural area, and the data will then be exported to a Geographical Information System (GIS) for managing resources and yield.

The Department of Survey and Mapping Malaysia (DSMM) or Jabatan Ukur Dan Pemetaan Malaysia (JUPEM) has recently awarded the Malaysia Real-time Kinematic GNSS Network (MyRTKnet) Phase III project to Antaragrafik. MyRTKnet Phase III is a continuation from the previous development phases of densifying the geodetic network infrastructure. The main objectives of this project are to mainly further strengthening the existing RTK network. Some of the works involved are to upgrade the central facility, to enhance the existing MyRTKnet network infrastructure and also by adding up more base stations throughout Malaysia. The system shall be installed and commissioned at Bahagian Geodesy, Jabatan Ukur dan Pemetaan Malaysia (JUPEM), Kuala Lumpur.

Antaragrafik Systems Sdn Bhd. via its local partner has been awarded to deliver an Unmanned Aerial Vehicle System (UAVS) to Jabatan Ukur dan Pemetaan Malaysia (JUPEM). UAVS is an end- to-end digital photogrammetric System from Mission Planning, Data Acquisition, Photogrammetric Project Management, Data Processing, Data Collection, Orthophoto Production and Data Distribution project that utilize a UAV for data acquisition method. This is the first time for us to deliver the UAVS system for the department to utilize when it comes to airborne data acquisition works for the purpose of making maps. Antaragrafik are delivering the UAV solution based on technology provided by Leica Geosystem and Intergraph Corporation.

The Department of Survey and Mapping Malaysia (DSMM) or Jabatan Ukur Dan Pemetaan Malaysia (JUPEM) has recently awarded the New Upgrade and Enhancements to Cartographic Systems (NUCS) project to Antaragrafik Systems Sdn Bhd. NUCS is an upgrade and enhancement project towards the cartographic systems in JUPEM where hardcopy, softcopy maps are being designed, collated, composed and finally published. At the same time dissemination of geospatial data will also be done through the WEB.

The department of Survey and Mapping Malaysia (DSMM) has awarded the infrastructure project for LiDAR database and LiDAR management or also known as LiDAR Data Centre (LDC) to Antaragrafik Systems Sdn Bhd. The project objective were to build, develop and deliver a LiDAR data management infrastructure that comprises of 5 petabyte of storage, 40 Gb backbone network between departments in view of huge LiDAR, photogrammetry imageries. We have also delivered to DSMM a dataset man agement tools to further enhance overall spatial data management and dissemination of spatial data within the department. The project have been delivered and completed successfully on October 2017. 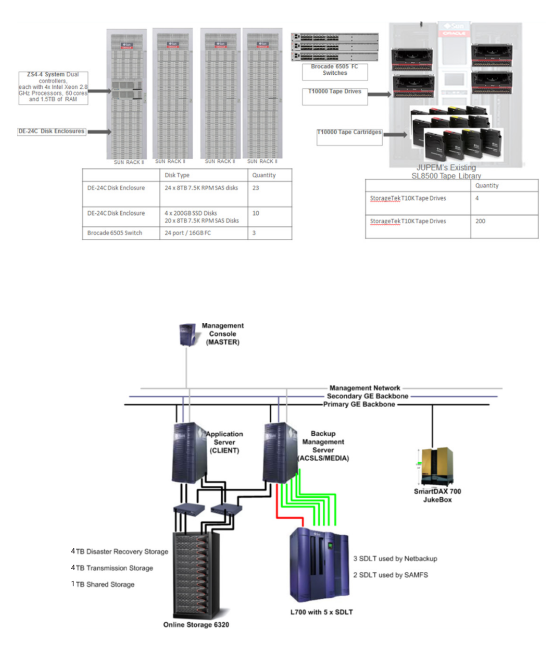 Interferometric Synthetic Aperture Radar (IFSAR) or generally known as Synthetic Aperture Radar (SAR) data have been considered and categorized as 3D geospatial that have been proven to be significant and paramount importance to both private and government agencies. It is known to be widely used for the purpose of security planning, defense, town planning, military strategic planning, local authority enforcement, search and rescue, disaster management, flood forecasting and warning, tourism, development sustainability among other various purposes at the national level.

Antaragrafik Systems Sdn Bhd have been awarded by the department of Survey and Mapping Malaysia (DSMM) to deliver X-Band and P-band IFSAR dataset of the Peninsular Malaysia with additional by products of Color Orthorectified Radar Image (CORI), multiple interval of contours, HRTE3 da-tasets among other type of elevation data. The project have been completed successfully by December 2017.

In view of acquiring high density and high accuracy of elevation data for the purpose of flood mitigation, planning and emergency response for flood prone area, the department of Survey and Mapping Malaysia (DSMM) have embarked on tendering LiDAR data acquisition project for an area of interest (2,033.529 km2) Sungai Dungun and Sungai Kemaman, Terengganu. Antaragrafik Systems have been awarded the project via its local partner to acquired the said dataset using LiDAR technology. We have successfully completed the project by delivering Digital Surface Model (DSM), Digital Terrain Model (DTM), multiband RGBN Orthophotos, contours and other dataset required in the tender specifications. The project was completed in July 2017. 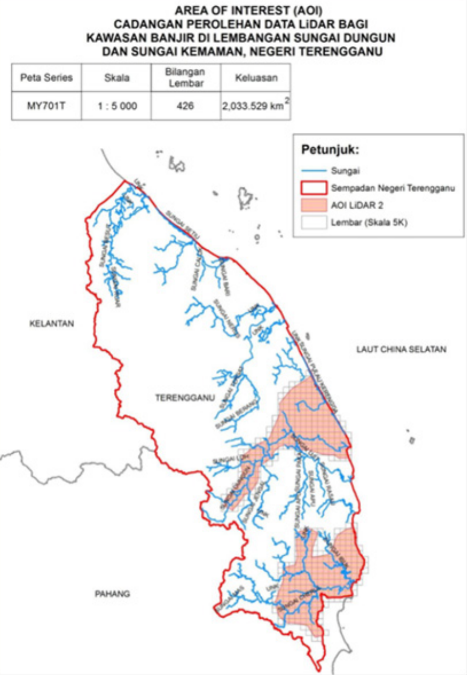 Inviewofacquiringhighdensityandhighaccuracyofelevation data for the purpose of flood mitigation, planning and emergency response for flood prone area, the department of Survey and Mapping Malaysia (DSMM) have embarked on tendering LiDAR data acquisition project for an area of interest (2,221.287 km2) Sungai Setia and Sungai Nerus, Terengganu. Antaragrafik Systems have been awarded to acquired the said dataset using LiDAR technology. We have successfully completed the project by delivering Digital Surface Model (DSM), Digital Terrain Model (DTM), multiband RGBN Orthophotos, contours and other dataset required in the tender specifications. The project was completed in July 2017. The Department of Survey and Mapping Malaysia (JUPEM) commissioned Antaragrafik to establish a system that gathers all data from all divisions within JUPEM for backup, recovery, warehousing and dis-semination purposes. Also, through the implementation of latest web mapping technologies, the JUPEM Geoportal website is created to allow public access to the department’s geospatial data warehouse, where they can select maps and conduct online purchase. On June 10, 2011, The Department of Survey and Mapping Malaysia ( JUPEM—Jabatan Ukur Dan Pemetaan) has awarded the maintenance of the Digital Aerial Mapping Systems (DAMS) project to us.

Department of Survey and Mapping Malaysia (JUPEM) has entrusted Antaragrafik to develop a sophisticated enterprise GIS and mapping system that has the ability to seamlessly integrate, store and process data from various applications and formats, while having the capabilities to output data in international formats.

This requires an interoperability that will speed the generation of accurate geospatial data, including terrain models, satellite photography, and fly-through simulations. The objective is to streamline daily mapping workflows, thus reducing the cost of time, work and resources associated with the creation, modification, and extraction of data.

The main objective is to have a fully digital sensor which will provide JUPEM with a system that will have digital aerial photos instead of film based aerial photos. This is one of the major steps in ensuring that the back end systems are also upgraded in line with the rest of the applications in the process of improving and enhancing the operation of the data acquisition. There are three main components in the “Digital Aeri-al Mapping Systems”.